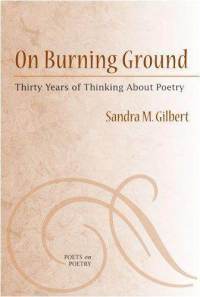 On Burning Ground: Thirty Years of Thinking About Poetry

The highly esteemed literary critic and poet Sandra M. Gilbert is best known for her feminist literary collaborations with Susan Gubar, with whom she coauthored The Madwoman in the Attic: The Woman Writer and the Nineteenth-Century Literary Imagination, as well as the three-volume No Man's Land: The Place of the Woman Writer in the Twentieth Century.