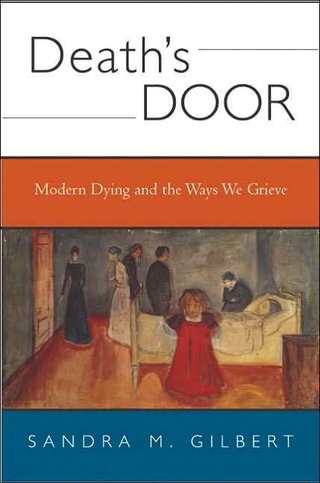 Death's Door: Modern Dying and the Ways We Grieve

Does death change—and if it does, how has it changed in the last century? And how have our experiences and expressions of grief changed? Did the traumas of Hiroshima and the Holocaust transform our thinking about mortality? More recently, did the catastrophe of 9/11 alter our modes of mourning? And are there at the same time aspects of grief that barely change from age to age?

Seneca wrote, "Anyone can stop a man's life but no one his death; a thousand doors open on to it." This inevitability has left varying marks on all human cultures. Exploring expressions of faith, burial customs, photographs, poems, and memoirs, acclaimed author Sandra M. Gilbert brings to the topic of death the critical skill that won her fame for The Madwoman in the Attic and other books, as she examines both the changelessness of grief and the changing customs that mark contemporary mourning. 25 illustrations

"Many readers will relate to Gilbert's grief following the unexpected loss of her husband in 1991: 'death suddenly seemed... urgently close, as if the walls between this world and the `other' had indeed become transparent.' In the process of mourning, the acclaimed coauthor of Madwoman in the Attic returned to a project she had abandoned in the early 1970s and invested it with the candor of recent loss. The resulting melange of literary criticism, anthropology and memoir looks at death across time and culture: in the Nazi concentration camps, 9/11, and the 21st-century "hospital spaceship," as well as through photographs, paintings and poetry. 'Like the sun, death can't be looked at steadily,' wrote La Rochefoucauld, heralding the modern view of the matter. (The medievals, in contrast, thought the process of dying was much scarier than death itself.) For Gilbert, the passage from a Christian theology of 'expiration' to a modern '(anti)theology of `termination' is best embodied in the poems of Whitman and Dickinson. Her close readings of our cultural history will entrance anyone interested in an intelligent analysis of the ways we grieve." --Starred Review, Publishers Weekly

"Becoming a widow suddenly brought poet and professor Gilbert (Univ. of California, Davis) to death's door. Over the last 14 years, she has transformed dismay, grief, reflection, and research into a book that explores, embraces, dissects, and reenlivens death. Other losses, including her first child at three days, figure in this autobiographical, poetic, anthropological, and historical treatment of a formerly taboo subject. Part 1 meditates on the psychology of grief, with D.H. Lawrence, William Butler Yeats, and Sigmund Freud, while Part 2 treats the reshaping of death in the last century. Part 3, "The Handbook of Heartbreak," has five chapters on elegy and lamentation from such writers as Sylvia Plath, Walt Whitman, T.S. Eliot, William Carlos Williams, and Allen Ginsberg to 9/11 and beyond. Disdaining the wishful fix of "closure," she writes, "Indeed the truism that death's door is always open has been the argument of this book." Neither triumph nor requiem, Gilbert's is a sensitive and sensible masterpiece addressing the door, teaching readers to see, feel, and think, even to touch and be touched. Her work, dark but also luminous, will help not only the bereft and those around them but also a society that loves and hates death blindly. Essential for both general and academic collections." --E. James Lieberman, George Washington Univ. Sch. of Medicine, Washington, DC. Starred Review, Library Journal