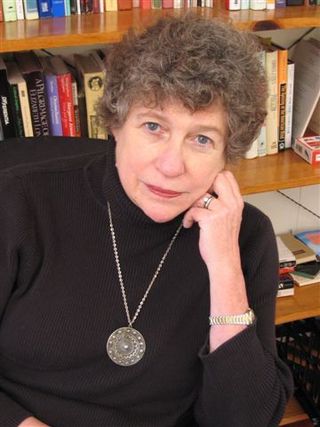 Sandra M. Gilbert, Distinguished Professor of of English Emerita at the University of California, Davis, is the author of eight collections of poetry: In the Fourth World (Alabama), The Summer Kitchen (the Heyeck Press), Emily’s Bread, Blood Pressure, Ghost Volcano and Kissing the Bread: New and Selected Poems 1969-1999 (the last four all from W. W. Norton), The Italian Collection (Depot Books), and Belongings (Norton). Her most recent volume of poems, Aftermath, was also published by Norton, in 2011.

Gilbert most recently published Rereading Women: Thirty Years of Exploring our Literary Traditions, with Norton in 2011. She contributed to the Poets on Poetry series at the University of Michigan with a volume entitled On Burning Ground, publishind in 2009. Gilbert has also published a memoir, Wrongful Death (Norton) and an anthology of elegies, Inventions of Farewell (Norton), along with a number of critical works, including Acts of Attention: The Poems of D. H. Lawrence (two editions, Cornell and Southern Illinois), and essays in journals ranging from Critical Inquiry and PMLA to Massachusetts Review, Kenyon Review, Partisan Review and others. Her poetry and fiction have appeared in such periodicals as Poetry, Field, the Ontario Review, Epoch, the American Poetry Review, American Scholar, the New Yorker, and elsewhere, as well as in a number of anthologies.

With Susan Gubar, a professor of English at Indiana University, Gilbert has coauthored The Madwoman in the Attic: The Woman Writer and the 19th-century Literary Imagination, and No Man’s Land: The Place of the Woman Writer in the 20th Century, volumes 1, 2, and 3: The War of the Words, Sexchanges, and Letters from the Front (all from Yale University Press). In addition, Gilbert and Gubar have coedited Shakespeare’s Sisters: Feminist Essays on Women Poets (Indiana) and The Norton Anthology of Literature by Women: TheTraditions in English. With poet and novelist Diana O Hehir, they have also edited MotherSongs: Poems By, For, and About Mothers (Norton); with poet-critic Wendy Barker, Gilbert coedited The House Is Made of Poetry, a collection of essays on the work of prize-winning poet Ruth Stone..

A former president of the Modern Language Association, Gilbert was the first M. H. Abrams Distinguished Visiting Professor of English at Cornell University in the spring of 2007; in the past she has also taught at Princeton, Indiana, and Stanford universities, as well as Cal. State, Hayward, and Williams College. She has been a recipient of Guggenheim, Rockefeller, NEH, and Soros Foundation fellowships, and she has held residencies at Yaddo, MacDowell, Bellagio, and Bogliasco. With Susan Gubar, she was named a Ms. “Woman of the Year” in 1986 and (also with Gubar) one of USA Today’s “People Who Made a Difference” in 1985. In 1988 she was awarded a D. Litt. by Wesleyan University, and in 1990, she was (with Karl Shapiro) a corecipient of the International Poetry Forum’s Charity Randall Award. More recently, she has won a Patterson Prize (for Ghost Volcano), an American Book Award (for Kissing the Bread), the John Ciardi Award for Lifetime Achievement in Poetry (from the Italian-American Foundation), the Premio Lerici Pea awarded by the Liguri nel Mondo association, and several awards from Poetry Magazine.. In 2004 she was awarded the degree of Doctor Philosophiae Honoris Causa by the Hebrew University of Jerusalem.

The mother of three and grandmother of four, she divides her time between Berkeley, California and Paris, France. Her late husband, Elliot L. Gilbert, was Professor and Chair of English at the University of California, Davis, and the author or editor of numerous critical books and articles.