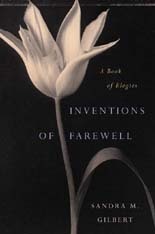 Inventions of Farewell:
A Book of Elegies

This anthology is designed to introduce readers to at least one way of mourning that has persisted through massive cultural and theological turmoil, even while it has also, of course, been transformed by the fluctuations of history: the form of lyric poetry known as the elegy. For centuries, after all, poets have lamented the mortal losses that all of us must inexorably encounter. Whether (with Dylan Thomas) counseling readers to “Rage, rage against the dying of the light”or (with Walt Whitman) taking comfort in the serene arrival, “sooner or later” of “delicate death,” most writers of verse have “sooner or later” had to face bereavement. Aesthetic assumptions and poetic styles have altered over the centuries, yet the great and often terrifying themes of time, change, age, and death are timeless, even though cultural imaginings of them may differ radically. As we begin a new millennium, therefore, having just in a sense “put to rest” the last two thousand years of our communal past, it seems particularly appropriate to turn our attention to literary encounters with life’s end as well as to the ways in which such encounters have been inflected by the public history and personal stories they both record and mourn.

Taken together, the traditional and not-so-traditional elegies included in this anthology dramatize the range of strategies through which poets have long sought to confront and confound mortality. Representing both what endures and what varies in modes of lamentation, Inventions of Farewell collects English language poems of mourning from the late middle ages to the present, focusing especially on works by modern and contemporary writers but also including such classics as Milton’s “Lycidas,” Shelley’s “Adonais,” and Whitman’s “When Lilacs Last in the Dooryard Bloom’d.”

What endures: this book is organized thematically in order to emphasize common questions, concerns, and tactics with which poets have for generations approached and lamented loss. As the table of contents indicates, there are two main sections: an opening section tracing the visions of death and dying--the necessities of mortality, as it were--that implicitly or explicitly shape a number of elegies; and a longer, second section cataloging the kinds of losses that poets have traditionally sought to record and sometimes even redress. Part I is then subdivided into four groups: poems recounting death scenes, poems focusing on “viewings” of the body in death, poems enacting funeral rituals or other ceremonies of separation, and poems imagining (in a whole range of ways) the ultimate fate of those who have died--perhaps a traditional “afterlife” or perhaps something very different. Similarly, after beginning with a group of poems ostensibly mourning mythic figures in the pastoral tradition of which “Lycidas” and “Adonais” are the most famous English-language examples, part II includes subsections devoted to poems lamenting a spectrum of different losses?the deaths of parents, of spouses and lovers, of children, of friends, of other poets, of the great and famous, and of the victims of war and other violence, along with what the critic Jahan Ramazani has called “self elegies” and more generalized meditations on mortality.

What varies: within individual sections, I have arranged poems chronologically in order to show how historical and cultural differences have produced aesthetic changes. In particular, my organization of texts is meant to illuminate the often strikingly transformed procedures for mourning devised by so many poets in our own era of mounting theological and social confusion. Thus Inventions of Farewell, my title for the anthology, is drawn from Wallace Stevens’s “The Owl in the Sarcophagus,” the poet’s beautiful, mysterious and curiously mystical elegy for his friend Henry Church. In this work, contemplating what he called the “mythology of modern death” that is the product of a skeptical age, the author of that post-Christian masterpiece “Sunday Morning” outlined a poetics of grief in which consolation comes from “inventions of farewell.” Such “forms of thought” may be merely “monsters of elegy,” Stevens concedes - mutations of a genre infected by what Matthew Arnold long ago called the “strange disease of modern life” - but they are also the “children of a desire that is the will,/Even of death,” a will to art and speech.